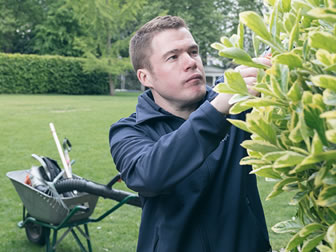 After spending six months as a Grosvenor Landscape Management apprentice, 31-year-old Ralph McCaffrey recently passed his probation period and is enjoying the hands-on, busy nature of the job. And with £36million worth of trees under the team’s stewardship, what a job it is.

“You always keep learning,” he says. “That’s the great thing about this job, there’s always something new to learn everyday. When you’re working practically, you always pick things up as you go along.” Ralph learned of the apprenticeship programme through Capel Manor College. “My assessor suggested that I should apply and I got an interview soon after,” he explains. He’s undertaking a level three apprenticeship, which is more supervisory and managerial in its teaching. “It teaches things like monitoring budgets and audits, as well as ordering equipment,” he says.

Despite the management opportunities his apprenticeship offers him, Ralph enjoys being outside and getting his hands dirty in the name of biodiversity. “At the moment I’ve been mulching and spreading compost in the flower beds to make them look nice, as well as some general maintenance. As the weather gets warmer, I’ll begin pruning,” he says, adding “I’m now confident enough to undertake work using my own initiative, which is really good.”

Ralph has Asperger’s and says that his confidence has improved since his time as a Grosvenor apprentice, particularly through the application process where he was required to give a presentation. “I used to be really shy, especially when I was younger,” he says. “But when we did the presentations during the interview day, the people I was presenting with were a bit reluctant to come forward and I had to step up and lead the presentation.”

Ralph’s confidence is apparent as he explains what it’s like working for Grosvenor and his enthusiasm for both the apprenticeship scheme and the company itself shines through as he speaks. “The atmosphere is good because everyone gets on with each other and we all help each other out. Everyone feels comfortable with everyone else in the business, that’s really great and I think this runs throughout the company,” Ralph explains.

“The other day I thought to myself: ‘I’m really happy, life is good’, and I think that’s nice. I come to work on Monday and feel happy,” he muses. In fact, Ralph is so positive about the scheme and working for Grosvenor that he’s already recommended it to some of his college peers.

So how has Grosvenor helped Ralph to grow as a gardener and an individual? “No question is a silly question,” Ralph says. Grosvenor offers undivided support for its apprentices when they need it, but Ralph enjoys the opportunity he’s been given to work as an individual. He also has a booklet to fill in each month, which Ralph credits with helping him consolidate the knowledge he’s acquired and taking charge of his own learning.

There are a number of spots around the Grosvenor estate that Ralph is pleased with, namely Chester and Eaton Squares, but his proudest achievement is the biodiversity work he’s done in Belgrave Square. “I’ve been able to make it my own,” he explains. And, as a Chelsea fan, meeting José Mourinho as he went about his daily tasks was also a highlight. “That was a bonus!” he grins.

The next few months present new tasks and challenges for Ralph to overcome, namely cutting the grass with the precision of a football ground gardener (“I always try to get the straightest lines,” he laughs) and continuing his learning. “That’s what’s great about this job,” he says sagely, “you just carry on learning as you go.