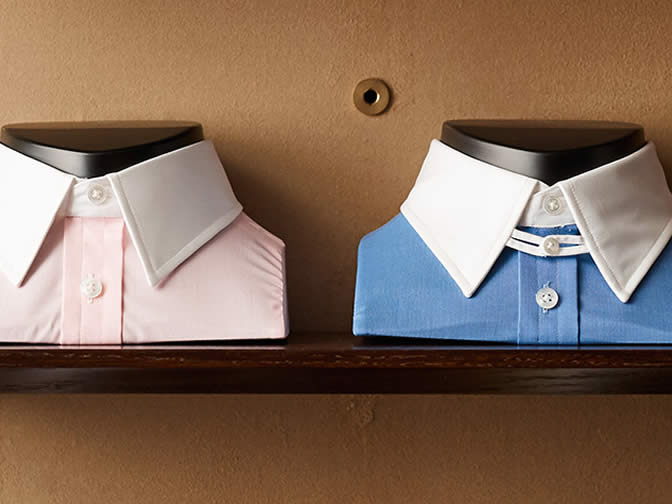 We sat down with Dean Gomilsek-Cole, Turnbull & Asser’s Head of Design, and James Cook, who manages the Davies Street store, to learn more about the menswear brand that’s taking Mayfair by storm.

A man who knows this well is James Cook, General Manager of the Davies Street store. James first came across the brand 21 years ago, while working for Harrods.

“I soon realised that the company – and its shirts, service, staff and clientele – was completely unlike any other,” he explains. The manager there at the time could see James’s interest and invited him to work at the Jermyn Street store. “It was a bit of a gamble at the time, going from 4,000 to 18 members of staff, but I never looked back,” says James.

Working at Jermyn Street gave James the opportunity to meet people from all walks of life. “I travelled the globe, just being on that carpet,” he explains. One of his most memorable encounters was with the actor Harvey Keitel.

“Mr Keitel came in to buy a cashmere gown and a dinner shirt,” James recalls. “He asked that I move the belt loops on the gown. I advised him that they looked great where they were, but he still wanted them removed, so we did as he asked.”

A sheepish Keitel later returned to ask for the loops to be moved back to their original place, thanking James for his candour. Months later, while James was managing the bespoke department in New York, he heard a familiar voice say, “My God, my man James from London!” He turned to see Keitel beaming at him. “That’s the magic of Turnbull & Asser,” says James. “You’re not just a number.”

Back to the future

The brand isn’t just praised for its bespoke offer; its ready-to-wear collections are equally distinctive. The man behind the current collection is Dean Gomilsek-Cole, brought in as Head of Design three years ago to take the company in a new direction. As the first designer hired by the men’s fashion house, there was pressure to deliver. But that didn’t worry Dean.

“I saw my role more as a curator, identifying the best parts of history that could be translated for a contemporary audience,” he explains. “It wasn’t an exercise in re-invention; more of bringing to light all the amazing things that had previously been created.”

Dean spent his first few weeks looking back through the archives, picking out everything he felt could be brought to the forefront for a contemporary consumer.

“I discovered some great pieces,” he recalls. “One of my favourites was the bespoke pocket square. I found the advertisement from 1930, which invited people to come to Jermyn Street with a picture of their dog or horse, so it could be hand-painted. That was one of the first things we brought back to life.”

Reviving old pieces is something Dean learned to do as a teenager. His first significant design project involved tailoring his school blazer and trousers. “My mother wasn’t very impressed, but it was my first real experimentation in design.”

Today, Dean’s experiments are largely influenced by his love of storytelling. “I create a storyline and then start to dress the characters, envisioning them on stage or screen,” he explains. “It helps my colleagues in London and New York to visualise the pieces and tell the story to our customers.”

With a wife who’s an interior designer, and a creative 10-year-old son who’s continually drawing, Dean also finds inspiration at home. “I am constantly surrounded by fabrics, paints and vintage furniture, so there is an endless creative energy,” he explains.

“My home environment’s very inspiring, but so is my new working neighbourhood of Mayfair,” he adds. “I’m inspired by real people, and by the local architecture.”

Turnbull & Asser’s recent collaboration with the Rolling Stones is a great example of Dean marrying this interest in people with his passion for history and storytelling. The result is a collection of ties, scarves and smoking jackets that create a new stage for the band’s lesser-known insignia and album cover artwork.

As we move into autumn and onward, into next year, customers can expect to see a range of new designs, including shirts in sea island cottons, new cashmere blends and some fantastic woollen overcoats woven in Somerset and made in London. There’s also the promise of one-off sunglasses handmade in one of the last remaining optical workshops in London.

And it doesn’t stop there. “There’s always something new and unexpected round the corner,” he adds. “I’d hate for us to ever become predictable. That will be the day I retire.”