Home ⟶ Stories ⟶ Our guide to living in Mayfair

Our guide to living in Mayfair

Living in Mayfair means something different to everyone who lives here. For many, it’s the allure of village charm on the doorstep of one of the world’s busiest cities. While others revel in the chance to ponder exquisite architecture at every turn. 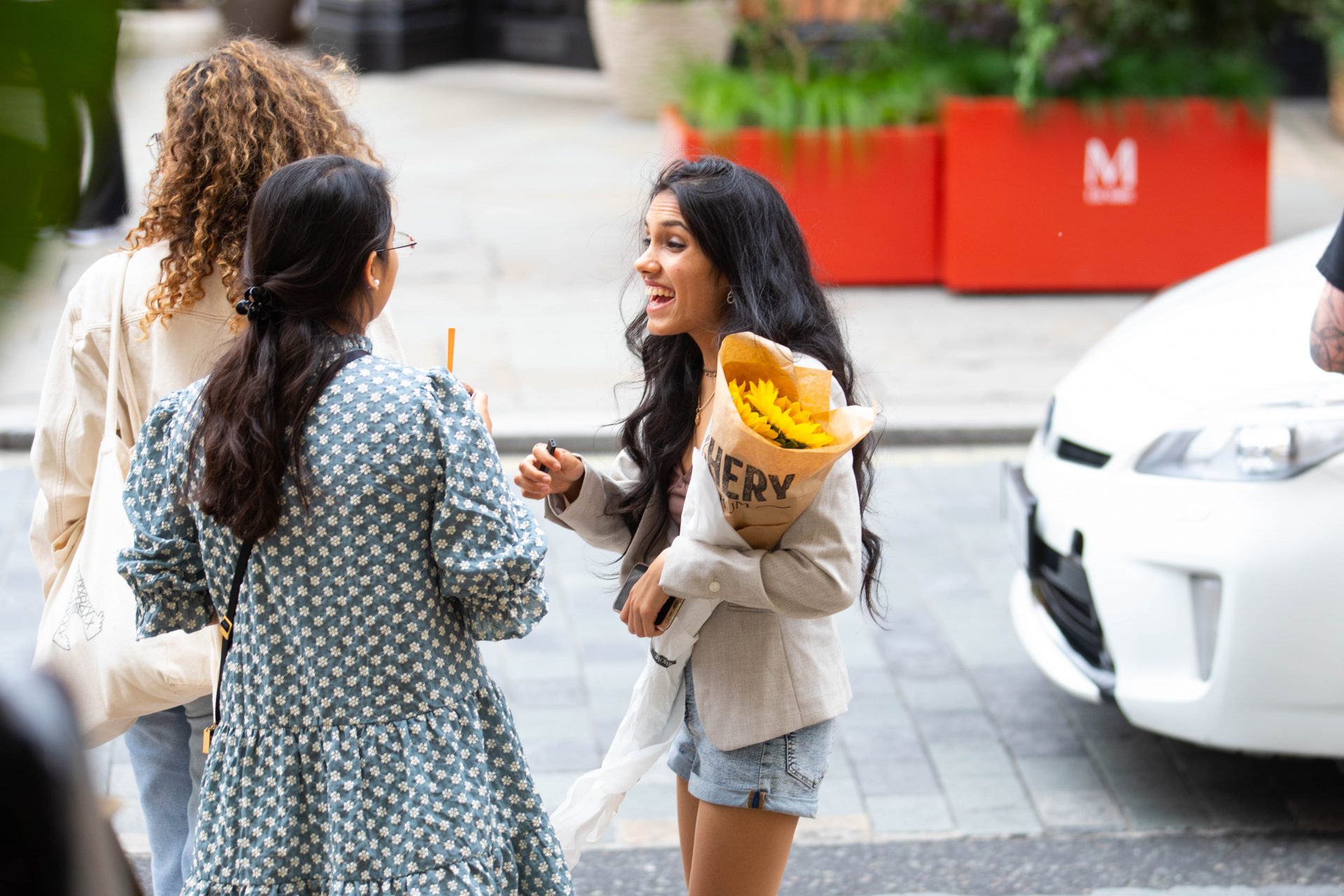 London’s exclusive W1 postcode encompasses a host of the capital’s best-known neighbourhoods. But few can compete with the charms and delights we find clinging to the leafy outer edges of Hyde Park along its easternmost border.

Mayfair is an eclectic mix of modern style and centuries-old tradition.

For those of us seeking out the latest trends, the name is synonymous with boutique fashion, fine art, international cuisine, exclusive hotels and even a spot of celeb watching!

And for anyone with a discerning flare for the glow of yesteryear, the scene is set to discover a world of 18th-century churches, pristine town squares with aristocratic connections and the oldest fine arts society in the world.

Living in Mayfair means something different to everyone who lives here. For many, it’s the allure of village charm on the doorstep of one of the world’s busiest cities. While others revel in the chance to ponder exquisite architecture at every turn.

Whatever the pull may be, everyone can agree on one thing — it’s one hell of a place to call home.

In this guide to living in Mayfair, we’ll walk you through:

Who Lives in Mayfair?

Like much of London’s past, we can trace Mayfair’s roots back for several centuries.

Mayfair was home to many wealthy families who continued to build on the earlier development in the area. But this all changed in more recent times as world wars changed our physical and socio-economic landscape.

Much of the large mansion and townhouse living gave way to offices and commercial use in its place. These smaller spaces presented the perfect opportunity for apartment conversions. Hence the rejuvenation of Mayfair’s residential sector over the last 70 years or so.

Mayfair now presents a quaint mix of mews houses, exclusive apartments and townhouses that remain in all their former glory. Of these, the majority are owned rather than rented. But we still see plenty of private rental opportunities in the area.

It’s easy to see why so many of us are drawn to Mayfair. World-class shops, bars, restaurants and hotels line every street. And reminders of a rich and proud history await us on every corner.

Mayfair’s urban hub is now more appealing to younger generations than ever before. And Gen Zedders have been relocating to the area en-masse in recent years. Millennials currently make up the largest section of residents who enjoy the incredible lifestyle that this district permits.

Over the years, we have seen many notable figures putting down roots in the area. And the list of celebrities who live in Mayfair is and always has been an interesting read.

Previous inhabitants include Queen Elizabeth II, Winston Churchill and Jimi Hendrix. And in modern times you’re likely to spot the rich and famous hanging out in the many trendy bars and Michelin Star restaurants.

The Mayfair lifestyle may well be defined by many as a buzzing social scene and an eye for the finer things. However, strolling around the square mile of prime real estate paints a very cosy picture in contrast to this reputation.

There are various gardens, parks and squares in the surrounding area for families to enjoy venturing out into nature. It’s a place where urban jungle meets rural serenity.

Nearly half of the local demographic works in finance, property and other professional services. And a good chunk of that population is within a couple of miles of their offices. In fact, nearly a quarter of those lucky enough to call themselves ‘locals’ regularly walk to work.

This presents a unique style of living. And our boast about the village feel of this zone is anything but cliché.

Unlike much of Central London, Mayfair enjoys the economic support of its local residents. As such, it doesn’t rely so heavily on passing trade and tourism.

A 2017 report highlighted that those living in Mayfair make double the financial contribution to the area than visitors do. But where does all this cash go?

There is certainly an element of lavish exuberance that goes hand-in-hand with the Mayfair lifestyle. With New Bond Street located at the very heart of the area, it would be impossible to deny.

Every nook is filled with fashionable shops, bars and restaurants. And many of London’s top eateries are based here. These include nearly a third of the capital’s Michelin Star restaurants.

Celeb hangouts are in abundance, as are a plethora of fine art galleries and museums. And they are all within easy reach for anyone wanting to visit.

Mayfair is extremely well-connected to the outside world. And exceptional transport links will take our guests right to the doorstep of every high-class offering in the neighbourhood.

The far-reaches of the district present no less than 5 underground tube stations. Along the northern border, we find Marble Arch, Bond Street and Oxford Circus. To the South are Hyde Park Corner and Green Park.

Furthermore, London Paddington, Victoria and Waterloo are all within 30 mins walking distance.

Crossrail’s Elizabeth Line will reach far beyond the city to the east and west with a major connection adjacent to the Bond Street tube.

Driving in Mayfair can be a costly business, depending on the type of vehicle. There is the Congestions Charge and Ultra Low Emissions Zone to contend with. And public parking without a permit is only allowed in the Pay and Display areas. There is also a 24 hour NCP car park at 21 Grosvenor Hill.

For locals who need to commute to work rather than walk, here is an idea of the travelling times to various areas.

Cycling around the area is now a far better prospect than it ever has been before. Many bollard-lined streets are popping up all over Mayfair to keep us safe on the roads.

No guide to living in Mayfair would be complete without a look at the housing potential that this fabulous zone has to offer.

The average house price in Mayfair for 2021 was £3,426,130. And the majority of opportunities come in the form of modern apartment conversions. 1-bed apartments start at around the £500K mark. But a 3-bed can range anywhere from £1 million to £6 million.

There are some incredible examples of Georgian townhouses available along the length and breadth of the upscale district. Most of which have undergone complete restoration over the past 200 years. The cost of these can vary greatly. We wouldn’t expect to see anything under £3 million. But top-end prices can expand to £20 million and beyond.

While most residents in Mayfair own their own homes, renting is still an option.

Aside from the celebrities, fine-dining and the art scene, we are constantly reminded of Mayfair’s down-to-earth qualities. Regular aspects of our lives including education and healthcare, for example, are high on the list of priorities. And it’s all right here moving perfectly in tandem with the more luxury details that define the area.

As we know, there are several top schools in the locale catering for all ages. And these are made up of both private and public education. Albemarle Independent College, St. George’s Hanover Square Primary School and Eaton Square Senior School are just a few of the names worthy of a mention.

And despite Mayfair’s small geographical imprint, there are many healthcare centres based in the area too. NHS GPs and private health providers are available throughout the neighbourhood.

Access to green spaces is something that Londoners proudly add to the list of privileges that this city offers us. And few areas are better placed to take full advantage of the natural surroundings than W1.

Hyde Park’s 142 hectares of relaxation and respite from the buzz of the city is right on our doorstep. As is Green Park with Regent’s Park just a stone’s throw away.

Berkeley Square and Grosvenor Square both offer a welcome chance to sit among manicured lawns and watch the world go about its business.