The History of Mayfair 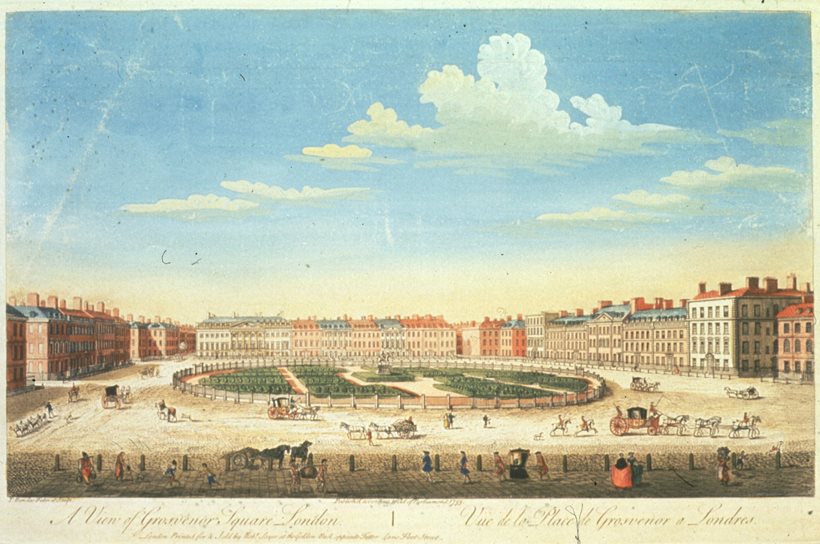 Situated in the heart of Mayfair, Grosvenor Square symbolised the apex of Georgian society. It exemplified a remarkable feat of estate planning and stewardship on the part of the Grosvenor family.

The square was built in the 1720s pursuant to the marriage in 1677 between Sir Thomas Grosvenor and property heiress Mary Davies, which created the opportunity for a visionary 100-acre development in Mayfair. As the eighteenth century progressed, the boisterous original spring fair – which brought drovers, animals, jugglers and revellers to the vicinity of Shepherd Market – was superseded by planned streets, elegant architecture, grand public spaces and of course the ‘ton’ (Society). At its heart lay this five-acre masterpiece – the first example of a London garden square taking an oval shape.

Two factors underpinned Grosvenor Square’s success. One was proximity to everything that mattered: parliament, St. James’s Palace, the opera, the best shops and services, the most connected clubs and coffee houses, not forgetting other less sanctioned pleasures. For the first time, and for several months of the year during the Season, the most elite families in the land were resident in London’s West End, which became a container of enormous power. Nowhere was this more apparent than in Grosvenor Square. Fully 69% of the square’s first tenants were titled.

The other factor underpinning its success was the way it brought the countryside into the city. It was blessed by having Hyde Park to its west. The prevailing winds in London tend to blow eastward, hence air quality was good. Sir Richard Grosvenor played a key role in the development of the oval-shaped garden. It was planted with almost a mile of elm hedging, 4,100 turfs, 2,635 small mixed ‘shrubs, plants and evergreens’ and 3,000 flowering shrubs. This ‘wilderness worke’ was criss-crossed with walkways.

It was a youthful, colourful and theatrical world. Indeed, it is easy to forget that, with the shorter average life expectancy of Regency times, over a third of the British population was aged under fifteen (the proportion today is half that). As Bridgerton vividly depicts, it was a world of boots, breeches, cutaway coats and ‘fine leg’ for men. Women sported pelisses and dresses made of rare and luxurious fabrics, with accessories such as exotic feathers and, increasingly, jewellery fashioned to sparkle, the more so at night in lamp or candle light.

The Duke of Dorset was a noted patron of the arts (he’d been on the requisite Grand Tour) and an accomplished cricket player. He went on to become an ambassador to France. He was also considered fiendishly attractive to women. The Countess of Derby, a fashion leader, vied with Georgiana Cavendish, the Duchess of Devonshire for the title of foremost beauty of their day.

The houses conformed to a type. Ground floors would contain reception rooms, while first floors would feature lavishly furnished entertaining rooms, with bedrooms above. Commentators remarked on the handsomeness of principal staircases. Basements comprised servants’ quarters. Stables at the back exited onto mews lanes and accommodated pedigree horses plus landau (convertible) and enclosed carriages.

Among Mayfair’s most charming streets today are those that the early developers reserved for tradespeople, including Mount Street and Mount Row immediately to the south of the square. These two streets would be rebuilt with Victorian terracotta frontages and distinctive Arts and Crafts houses, but keeping servants and tradespeople close to the grand houses sustained a diversity of social strata and cultures in Mayfair through to present day.

The popularity of Grosvenor Square itself, particularly with Americans, would result in many changes to its buildings, culminating in the US Embassy occupying its west side in the 1950s. Yet Georgian houses remain, and if the original developers returned to the square today, it would be entirely legible to them.

One of the original houses is number 9, at the north east corner – now a private office but once the residence of John Adams, the first American Ambassador to Great Britain and the second US President. Another intact house is the 3rd Duke of Dorset’s former residence at number 38. Ceilings, fire places and other internal features remain as they were back in the Duke’s day.